Aspasia has over twenty five years of specialization in advising on Tax law and representing clients before the Administrative Courts and the Council of State. She has vast experience in advising on income, inheritance, donation and capital gains tax imposed on individuals and companies, the tax arising from a broad range of transactions and indirect taxation. Her studies in economics have afforded her a business-minded approach to the practice of law.

Aspasia has taken part in committees set up to examine tax legislation in the context of public consultations at the Ministry of the Economy and working groups at the Hellenic Federation of Enterprises for the improvement of taxation system. She is Secretary of the Greek Association of Tax Law and Fiscal Studies, in which capacity she has organized and participated in numerous seminars, lectures, conferences and working groups on the interpretation of tax legislation in Greece and abroad. Aspasia has taught courses on tax law at ALBA Graduate Business School and seminars at the Athens Law Society and the Ministry of Finance on developments in the tax code. She is widely published in newspapers and periodicals and conducts research for tax law publications. Since 2011, Aspasia has acted as editor of the Tax Law Bulletin, a leading Greek publication where she has contributed as a director for the last twenty five years.

The practice of taxation law has always attracted me. In a democracy, taxation does not only impose obligations: to the contrary, it suggests the point at which each centrally governed society understands and realizes freedom of the individual and the welfare state.
Tax|Jun 2015

Aspasia Malliou and team successfully represented two individuals before the Greek Tax Authorities achieving the reduction of the primary assessment act of a tax audit to be reduced  from €30m to €1.3m in the first case and from €5.6m to €0.5m in the second case. 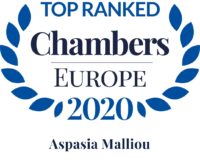 Malliou is well-versed in advising companies and private individuals on tax matters relating to business planning and structures.

An article worth reading

Read the latest article by Aspasia Malliou, Tax Partner at POTAMITISVEKRIS, and Editor of the Tax Law Bulletin “Deltio Forologikis Nomothesias.” She examines the particularly…

Aspasia Malliou, Partner and Head of Tax Practice, participated as a speaker at the two-day conference on “Current Tax & Social Security Law Issues…

POTAMITISVEKRIS will be attending the 1st Tax Law Conference-Entrepreneurship and Taxation, organized by NOMIKI BIBLIOTHIKI. The Conference will take place at Wyndham Grand Athens,…

Event regarding the law on corporate transformations (L.4601/2019)

The Greek Commercial Lawyers Association together with the Greek Tax Law & Fiscal Studies Association, are organizing an event regarding the recently enacted law…

Aspasia Malliou, a taxation specialist, joined the firm as a Partner and Head of the Tax Department, confirming our commitment to providing end to…