Aspasia has nearly 35 years of specialization in advising on Tax law and Private Wealth structures. She also handles heavy tax matters before the Administrative Courts and the Council of State. Her studies in economics have afforded her a business-minded approach to the practice of law.

Aspasia has taken part in committees set up to examine tax legislation in the context of public consultations at the Ministry of the Economy and working groups at the Hellenic Federation of Enterprises for the improvement of taxation system. She is Secretary of the Greek Association of Tax Law and Fiscal Studies and treasurer at Greek department of the International Fiscal Organization (IFA). She has organized and participated in numerous seminars, lectures, conferences and working groups on the interpretation of tax legislation in Greece and abroad. Aspasia has taught courses on tax law at ALBA Graduate Business School and seminars at the Athens Law Society and the Ministry of Finance on developments in the tax code. During the last years, she also participated as a lecturer in the graduate degree program of Athens University of Economics and Business. She is widely published in newspapers and periodicals and conducts research for tax law publications. Since 2011, Aspasia has acted as editor of the Tax Law Bulletin, a leading Greek publication where she has contributed as a director for the last thirty-three years.

It is only fulfilling to be part of a team that has such strong ethics and provides innovative solutions, driving its success by that of its clients and aiming to create a sustainable impact in Greece.
Tax|Jun 2015

Aspasia Malliou and team successfully represented two individuals before the Greek Tax Authorities achieving the reduction of the primary assessment act of a tax audit to be reduced  from €30m to €1.3m in the first case and from €5.6m to €0.5m in the second case. 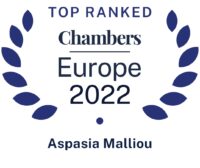 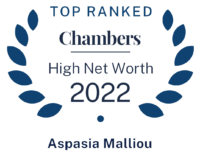 "She is one of the best tax advisers I have come across," one client says, adding that "her advice is reliable and her personal skills outstanding"

On February 2, 2022, Aspasia Malliou, Partner and Head of POTAMITISVEKRIS Tax team, along with a well-respected team of Tax associates: M.Kilatou, E.Thomopoulou and…

POTAMITISVEKRIS will be attending the 3rd Conference on Tax Law, organized by NOMIKI VIVLIOTHIKI.Our Partner and Head of our Tax Practice, Aspasia Malliou, will…

POTAMITISVEKRIS will be participating in the Delphi Economic Forum 2021

POTAMITISVEKRIS will attend the sixth edition of the Delphi Economic Forum, which will take place at Zappeion Megaron, in Athens, in a hybrid format….

A special edition of DFN has been launched for the 200th anniversary of the Greek War of Independence against Ottoman rule in 1821.This publication…

From the era of Turkish rule to the Revolution of 1821 and the foundation of the modern Greek state. A chronological look at tax legislation

An article worth reading

Read the latest article by Aspasia Malliou, Tax Partner at POTAMITISVEKRIS, and Editor of the Tax Law Bulletin “Deltio Forologikis Nomothesias.” She examines the particularly…

Aspasia Malliou, Partner and Head of Tax Practice, participated as a speaker at the two-day conference on “Current Tax & Social Security Law Issues…

POTAMITISVEKRIS will be attending the 1st Tax Law Conference-Entrepreneurship and Taxation, organized by NOMIKI BIBLIOTHIKI. The Conference will take place at Wyndham Grand Athens,…

Event regarding the law on corporate transformations (L.4601/2019)

The Greek Commercial Lawyers Association together with the Greek Tax Law & Fiscal Studies Association, are organizing an event regarding the recently enacted law…

Aspasia Malliou, a taxation specialist, joined the firm as a Partner and Head of the Tax Department, confirming our commitment to providing end to…