Dimitris mainly focuses on the areas of European law, competition law, regulatory, compliance and public law representing both domestic and foreign entities.  His scope of expertise includes investigations, notifications and other regulatory procedures before EU and national administrative agencies, in follow-on court proceedings, as well as in business negotiations and compliance matters.

He has extensive and in-depth regulatory experience reflecting his  many years as Vice-President and Commissioner-Rapporteur of the Hellenic Competition Commission, as well as an official at DG Competition of the European Commission. Previously, Dimitris worked for several years as a lawyer for Slaughter and May (London & Brussels) and Davis Polk & Wardwell (New York), advising on matters of EU, UK and US competition law and representing clients before enforcement agencies in a wide variety of product and services markets. His private practice focused on domestic and cross-border mergers, acquisitions and joint ventures, restrictive agreements, abuse of dominance, compliance and investigations, internal market, state aid, litigation before the EU Courts, as well as on other regulatory procedures before administrative authorities and government/public affairs.

Dimitris was a member of the EU Council’s negotiation team for the adoption of the new Directive on antitrust damages actions, as well as the legislative committee for the revision of the Greek Competition Act and the EU Commission’s working group for the revision of the vertical agreements block exemption regulation and guidelines and a regular delegate-representative at the OECD and the European Competition Network. He also teaches as a visiting lecturer at the National School of Judges, as well as at post-graduate law and business university programs.

“To navigate through complex enforcement investigations and regulatory procedures in the most effective manner, one needs to defend rigorously clients’ interests and advance their business growth potential, while recognizing the importance of addressing agencies’ concerns in order to achieve the best results. Sustained and preventive compliance work often helps to avoid intense regulatory scrutiny or ensure a successful outcome in ensuing litigation proceedings”
EU, Competition & Antitrust|Dec 2020

State aid in the aviation industry

Dimitris Loukas and team advised a major network airline based in Greece in relation to the European Commission’s approval of a State support measure in the form of a direct grant to compensate the airline for damages directly caused by the COVID-19 outbreak and the travel restrictions imposed by Greece and other destination countries to contain it.

Acquisition in the healthcare services sector

HCC ex officio investigation in the banking and payments sector

Foreign investments in the energy sector

Privatization in the energy sector

Dimitris Loukas and team advised the Hellenic Republic Asset Management Fund in relation to state aid issues possibly arising in the context of a tendering procedure for a concession award. 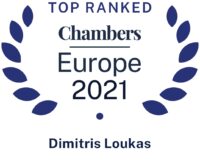 Dimitris Loukas is 'the competition heavyweight in Greece' and a 'recognised expert in EU competition law' who 'offers amazing value to clients'.

Getting the Deal Through – Lexology – Private Antitrust Litigation 2020, Greece Chapter

Getting the Deal Through – Private Antitrust Litigation 2019, Greece Chapter

Dimitris Loukas, Head of the EU, Competition & Antitrust Practice, will participate in the presentation by The Hellenic Federation of Enterprises (SEV) of an…

Dimitris strengthens the Competition & Antitrust Practice of PotamitisVekris by joining as its tenth partner, after having served for many years as Vice-President and…